Although much of my past work on computer visualization and graphics was designed for workstation/desktop/laptop systems, over the past few years I have become increasingly convinced that mobile computing devices (tablets/PDAs) are going to be the next big frontier in visual interactive systems.  Consider that an iPad held at arms length has about the same angular size (and proportion of your field of view) as a 52″ flat screen in your living room, and a standard movie screen in a theater.  This is an incredibly rich visual presentation, so close that you can interact with it directly. 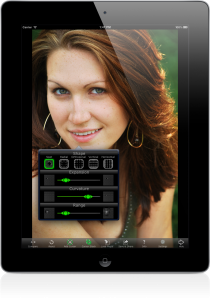 Among other projects, I produced an app for the iPad called PhotoXform that allows the user to “sculpt” or “shape” images using a suite of nonlinear magnification tools.  PhotoXform started as an exercise in exploring the potential of tablet computers, and I was impressed to find vertex and texture processing power on that iPad that in some ways rivals the Silicon Graphics workstation I was using a decade ago.  There is a quick demo video of it in action.

After a great run of 5 years on the App Store with a 4+ Star rating, I withdrew PhotoXform+ from the App Store in 2016.  I could no longer justify the time required to keep it compatible with all of the new devices and iOS updates, especially given my newer high priority activities.